Characterized by lush equatorial jungles, open savannah plains, woodlands and glacial mountains, the D.R. Congo is without doubt a famous destination in Africa, quite secretive and a shelter to tens of thousands of mammals, rare primates, endemic birds, and chimpanzees. Some of the remarkable fauna hosted here include lowland gorillas, mountain gorillas and forest elephants. The extensive lush Congo basin covers most of the eastern and central region of D.R. Congo, making it the world’s 2nd biggest rainforest after the amazon forest in south America. This large ecosystem is host to rare mammals, birds and primates that are non-existence elsewhere in Africa.

A trip to the D.R. Congo takes those intrepid travelers to the smoky jungles, savannah plains and Virunga mountains which shelter abundant fauna ranging from rare chimpanzees, plenty of gorillas, vibrant birdlife, butterflies, forest elephants, colorful fungi, and critically endangered eastern lowland gorillas. In D.R. Congo, tourism is not new but has had numerous challenges ranging from armed robbers, military conflicts, rebels who put the lives of tourists and park rangers at a risk, but thank the park management and other conservation partners, hope has been restored and now Congo is again on a tourism map as a destination to look out for. The well managed eco systems of Congo provide long term refuge to an array of fauna and birds alike.

For those people searching for an out-of-the-normal adventure experience and a unique safari encounter, D.R. Congo is for you. Filled with less trodden places, next to virgin; intrepid travelers here have an opportunity to be among the first explorers to this less visited region of Africa and hence pave way for conservation and a sustainable future.

It seems we can’t find what you’re looking for. Perhaps searching can help.

Virunga and Nyiragongo are two of the famous and most visited places in eastern region of D.R. Congo. Both destinations are not for the fainthearted, but they surely deliver a worthwhile experience for those who are determine to pay a visit.

Virunga national park alone is Africa’s oldest conservation area and a host to 6 gorilla families, well habituated for tracking. Trekking mountain gorillas happens mainly in two regions – Mikeno and Bukima sectors where trackers, visitors and porters follow a habituated group of gorillas, for about 3-6 hours until you get to meet the group and stay with it for not more than 60 minutes. Watch the gorillas as they naturally interact among themselves, observe their lifestyle, ask questions and admire their story as told by the ark guide.

Virunga national park is a famous park as it hosts both the eastern lowland gorillas and mountain gorillas, both dwelling in a common ecosystem. In addition to these giant apes, there are chimpanzees, forest elephants, lions, hippos and the critically endangered okapi.

Other than being Africa’s most biologically diverse and rich national park, it is also the continent’s oldest and largest park, established in the year 1925 and covering surface area of 7,500sq.km respectively. But most importantly, it is located in a region which is filled with extinct, dormant and active volcanic mountains. Remarkably in the park’s neighborhood, you will find two of the most active volcanoes, Nyiragongo and Nyamuragira, which up to now the slopes are still boiling with volcanic magma. In a close distance, you can view the glaciated slopes of Rwenzori Mountains – the region’s highest block mountain and snow caped all year round.

Nyiragongo Mountain on the other hand is part of the larger Virunga massif that stretches from Southern Uganda to Rwanda and to D.R. Congo with up to 8 distinct mountains. Nyiragongo is hiked from the Virunga side, and travelers spend about 5-7 hours to reach the summit, but every step of the hike is rewarding with views over the lava lake, other volcanoes, lush flora and vibrant birdlife. 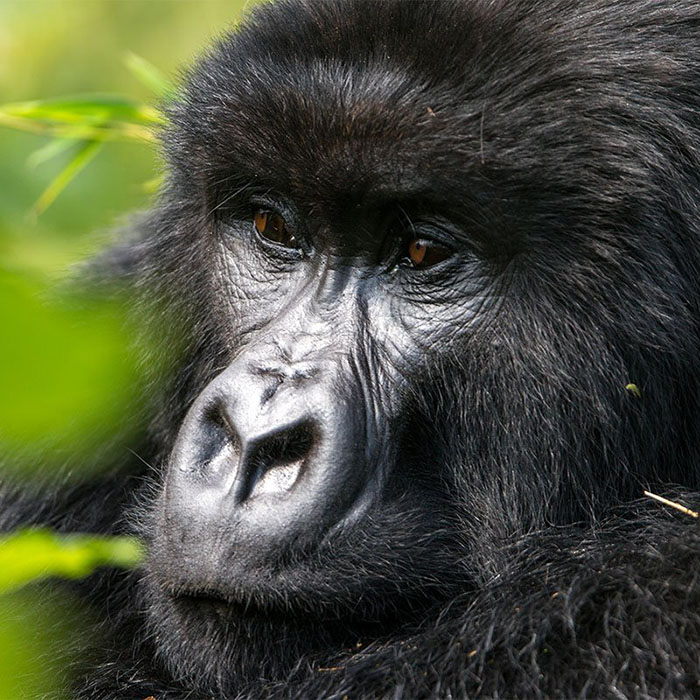 In 1970 Kahuzi-Biega national park was awarded park status with a huge chunk of surface area, totaling to 6000 square kilometers. In the neighborhood, there are two volcanic domes within the Mitumba ranges – Mount Kahuzi (9,153ft) and Mount. Biega (1,085ft); it is from these impressive mountains that the park got its name.

Since inception in 1970, Kahuzi-Biega national park was primarily founded to protect the few wild lowland gorillas that existed at a time; and secondly to preserve other resident fauna species. In the early 1980s, Dian Fossey, an American primatologist began her research and conservation activities in east Africa and this park was of much interest as well as Virunga national park, Volcanoes national park in Rwanda and Uganda’s Mgahinga Gorilla National park. It is during this period that more than 700 Sq. Km of land were added to the park, to include the Lugulu and Luka river tributaries, mountain valleys and the watershed.

Though conservation of gorillas in the park is still a challenge given the fact that it is surrounded by high populated communities, at least 40 individuals divided into 2 groups have been habituated and are open for tourism all year long. Other than eastern lowland (graueri) gorillas, the park is home to an array of other primates and mammals such as forest elephant, several sub species of monkeys, baboons and non-habituated troops of chimpanzees. 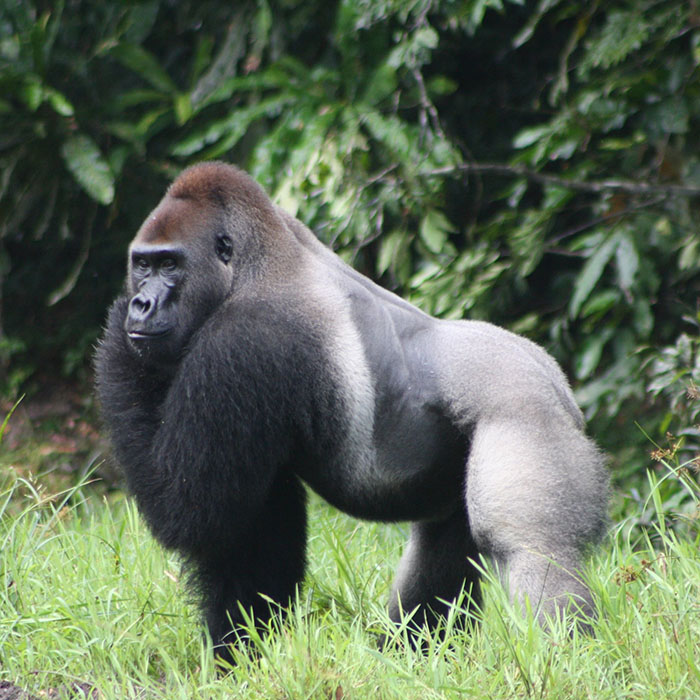 One of the most famous conservation projects around Virunga national park is the Senkwekwe mountain gorilla orphanage. It is a center where rescued or orphaned gorillas are brought and taken care of until that time when they’re released back into wilderness.

It is the only gorilla center in the world and viewing these innocent apes going about their usual routine in an enclosure is an emotional but also rewarding experience. D. R. Congo is culturally a diverse and rich nation with unique traditions, including songs / Lingala, dressing code, cuisine and energetic performances and dances. 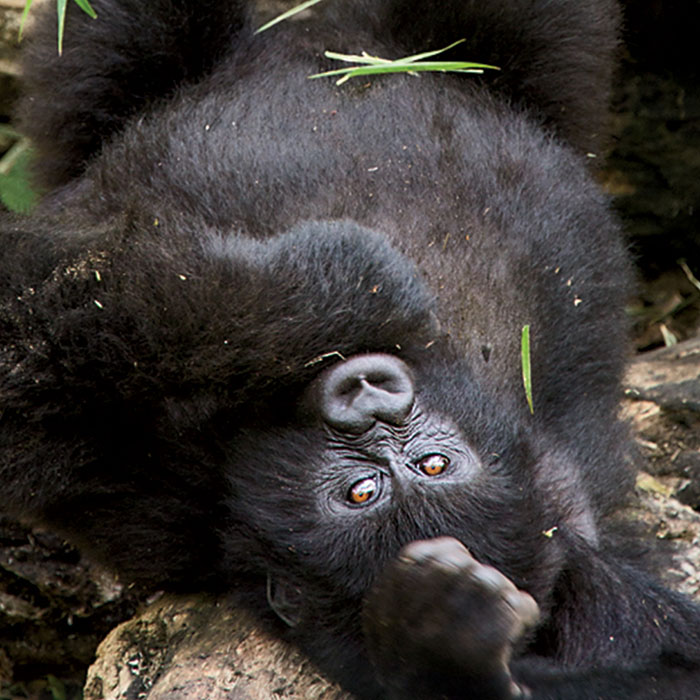 Congo receives much rains in late October and November, while less rains happen in March through to May and this is obviously not a recommended time for travel, as infrastructure breaks down in some remote areas, lush forest growth that hinders proper scenic viewing, trekking and mountain climbing also become difficult.

The perfect dry months for travel are January, February, June – September and December, when the skies are clear, photography is superb and perfect scenic views. 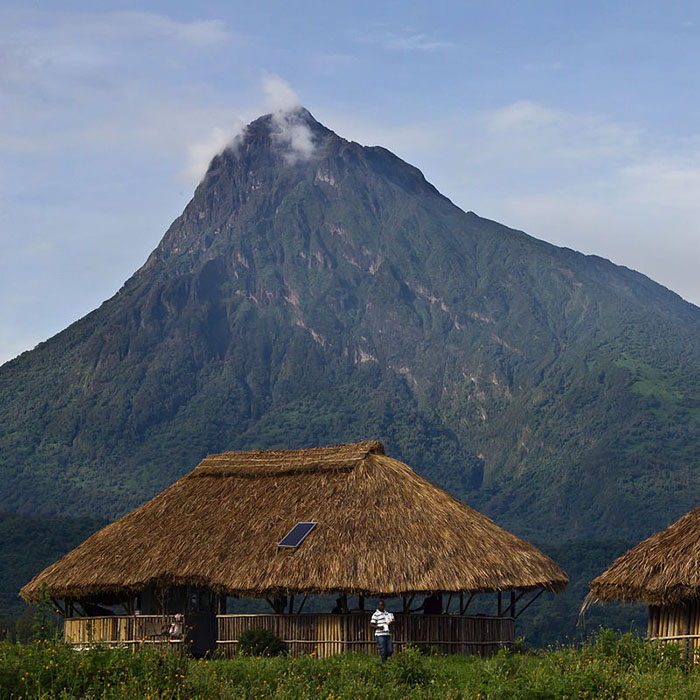