From the mighty Ngorongoro conservation area to the Serengeti dusty plains and magical Kilimanjaro mountains; Tanzania teems with wildlife and it’s by far the “land of safaris”. Whether you take a game drive to watch towering giraffes amongst baobab trees in Serengeti, huge herds of elephants in Tarangire or gaze at scary prides of lions in Ngorongoro crater; Tanzania has it all. Tanzania is the true soul of Africa and for good reason, it has all it takes to offer ultimate African safari experiences. Safaris in Tanzania are spellbinding moments filled with nothing more than adventure and excitement that leave awe-inspiring memories even after the trip. Take a 4X4 luxury safari within the dusty tracks of Serengeti and experience unique wildlife like you’ve never seen before.

When the name Tanzania comes across your ears, it’s the great annual migration that you remember; it is because this is a highlight activity where over 1 million wildebeests and over 200,000 zebras embark on an epic journey to seek refuge in Masai Mara national park. On the other hand, Ngorongoro crater is another 2.5 million old conservation area comprised of sublime views overlooking an extensive natural plain filled with Big 5 mammals. Or just take a safari to track the rare tree climbing lions and bird watching experiences in Lake Manyara national park. For honeymooners and family safari undertakers, a 3-day tour to the gigantic Selous national park in southern Tanzania is worthwhile; marked with almost largest animal population in Tanzania. The 54,000 sq.km park boats not only 750,000 animal species, but also stunning terrain and prides in being the world’s biggest national park. Selous national park can be explored both on foot and by 4X4 safari land cruiser.

Other world heritage sites include Oldupai gorge, Kilimanjaro mountains and Lake Manyara national park. Tarangire, Ruaha, Katavi, Arusha, Mahale mountains, Gombe stream and Mikumi national parks are some of the parks that offer exclusive wildlife safaris in Tanzania, as well as bird watching experiences, enthusiastic nature walks, forest trekking, canoeing, boat cruises and amazing site seeing opportunities. Though Serengeti and Ngorongoro are high on the bucket list for every traveler to Tanzania, but there is so much more to explore beyond these two destinations. 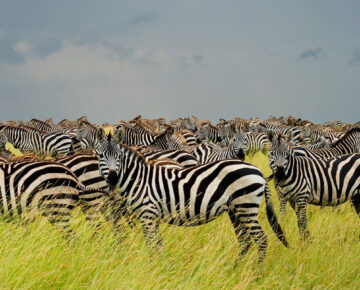 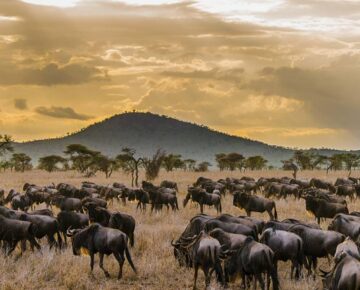 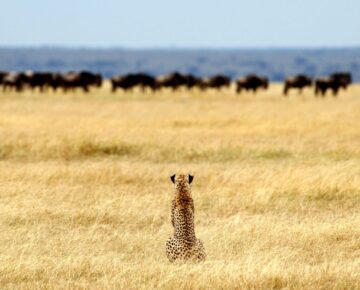 Being one of the most popular safari destinations in the world, Serengeti is a 5-star attraction in Tanzania and beyond. For iconic golden plains, filled with extraordinary array of game, it offers a perfect conclusion to the great wildebeest migration and it is important to note that Serengeti has it all.

While in Serengeti national park, there is so much to look out for all year round; expect lion sightings, cheetahs, elephants, elands, mongoose, giraffes, huge herds of buffaloes and most dramatically witness the world’s most iconic wildlife migration as wildebeests and zebras bound to cross from Tanzania to Kenya via Mara River. 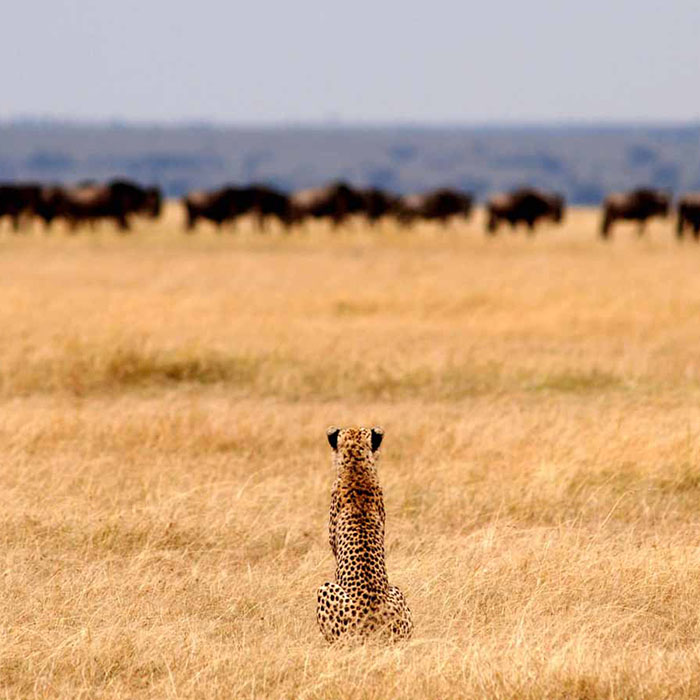 This is a UNESCO listed site because of its wealth of biodiversity and strikingly beautiful plains. It is without doubt the most visited destination in Tanzania all year long. Ngorongoro crater is a 300 million years old feature that was formed after the explosion and collapse of a volcano and it remains the only habitat where black rhinos can be viewed as well as a convenient place where travelers tick off the Big 5 one by one.

It is a fertile land where animals and flora find it easy to thrive; this is because of volcano soils rich in minerals that make growth of lush grass and spring – fed lakes possible and easy. The floor of Ngorongoro crater is a playground for unique wildlife allowing one to meet millions of game grazing together. Spend a night or two on the crater rim to see this magic and do some photography. 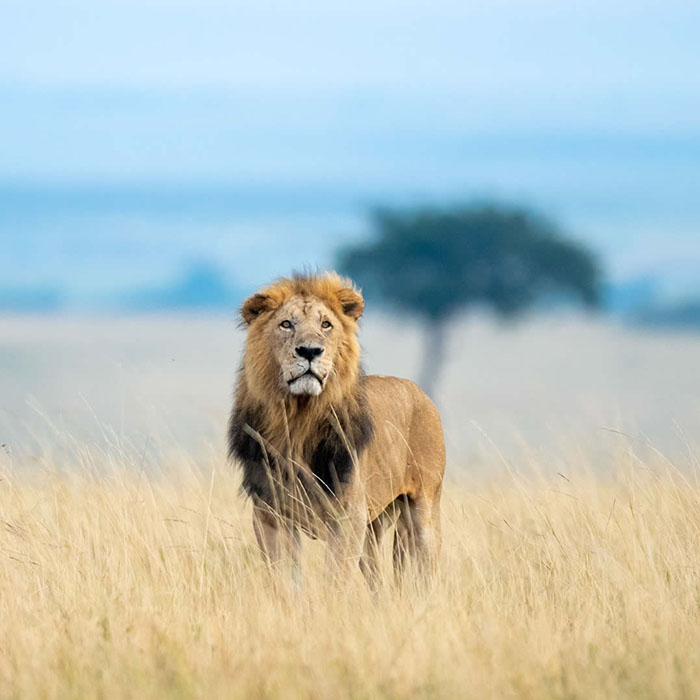 The Great Wildebeest Migration in Tanzania

An opportunity to witness one of the world’s 7 wonders draws millions of tourists all over the year every year to Tanzania. This wildlife phenomenon can be encountered in northern Tanzania and it happens from the month of June to September and the herd returns between Decembers to February.

With our experienced team of consultants and field guides, we bring you to a perfect viewing where you can meet up-close with the great migration. This is the biggest wildlife spectacle in the world and the largest over-land migration where 1.5 million wildebeests together with 200,000 zebras and gazelles move up to 2000 kilometer cycle between Serengeti and Masai Mara national parks. The migrating herds keep on the lookout for water and fresh pasture on an eternal journey of life. This extraordinary array of beasts attracts multitudes of predators including leopards, hyenas, vultures and lions. 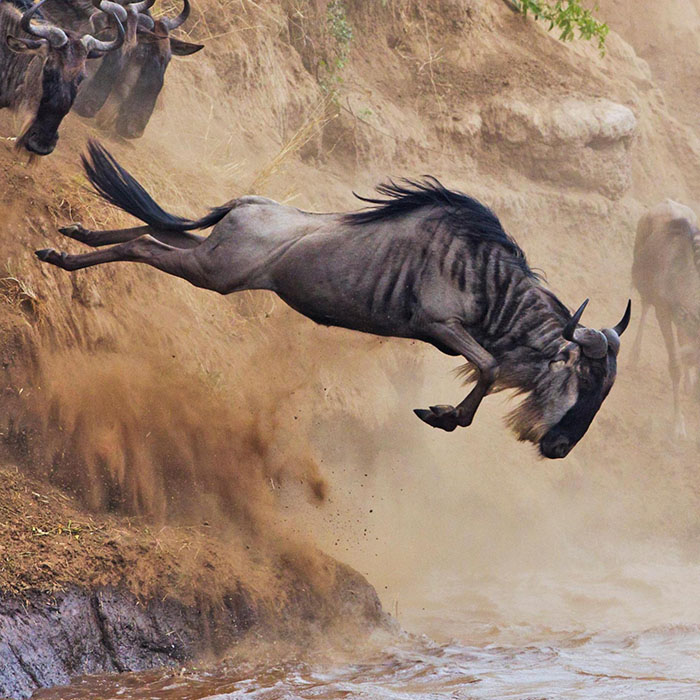 Codenamed the “roof of Africa”, Kilimanjaro is Africa’s tallest mountain and world’s highest free – standing mountain, which towers over the wide open plains of Serengeti and Amboseli in Kenya. Its peak is covered with snow all year long and on a clear day hikers can view the snow from a distance of 150km away. Kilimanjaro’s gleaming glaciers offer stunning back drop for safaris in the nearby areas. Three peaks that make up Mount. Kilimanjaro include Kibo, which is the highest standing at 5,895m above sea level, Mawenzi peak, 5,149m and Shira at 3,962m above sea level.

Climbing to one of these peaks is extremely an enjoyable adventure which lasts between 5-9 days depending on the route taken and speed of trekkers. But the highest peak, Kibo can be reached by anyone regardless of their hiking experience. 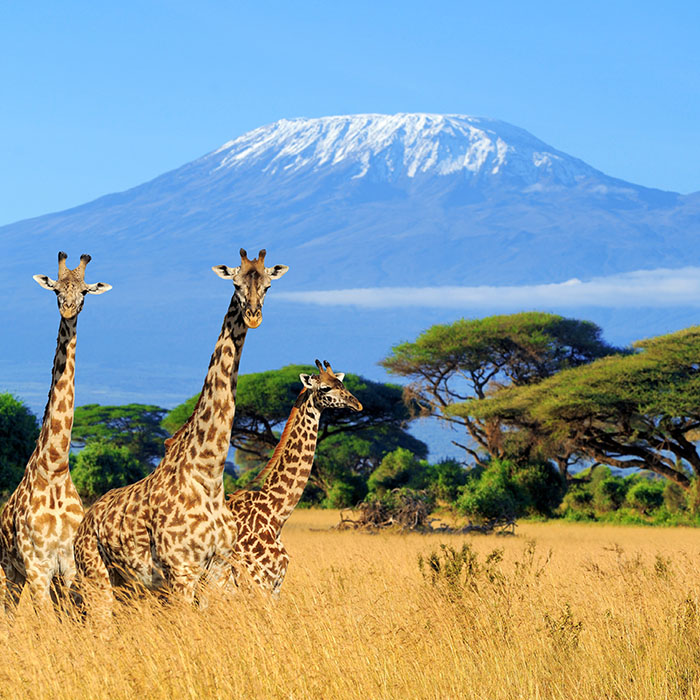 For game viewing safaris in Tanzania, June, July, August, September and October months are excellent, since the plains are dry and open perfect for scenic views and photography. Months like March to May and November are characterized by torrential rains which make it hard to access some national parks which are located in the countryside, therefore not recommended for travel.

The dry season is also excellent for trekking primates in Mahale and Gombe stream national park as well as hiking mountains like Kilimanjaro and Meru. It is however important to note that occasional rains can happen even during dry seasons. 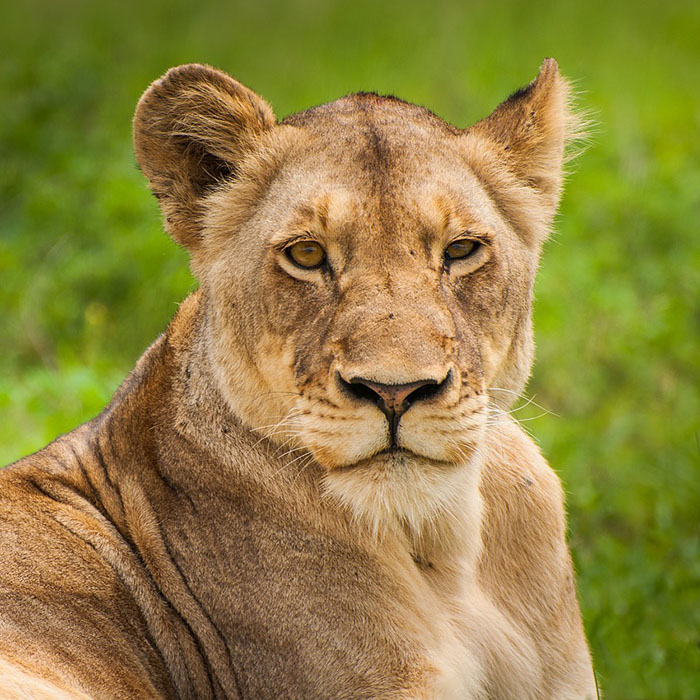